In June 1983, the Government of Canada established the Bay of Fundy Traffic Separation Scheme (TSS) following 1982 adoption by the International Maritime Organization (IMO, an agency of the United Nations).

The marine safety measure provided for the separation of vessel traffic between the southeastern entrance to the Bay of Fundy and the Port of Saint John, New Brunswick and organized the traffic through an area extensively used for fishing. The TSS is located entirely within Canada’s territorial waters and is mandatory for all vessels greater than 20 metres (65 feet) in length. Although this scheme organized traffic within the Bay of Fundy, subsequent research 10 years later showed that it also directed vessel traffic through the middle of a critical right whale habitat in an area with a high concentration of right whales where the risk of vessels colliding with right whales was greatest.

Considering that vessel strikes of right whales are responsible for the majority of human-induced mortalities, we sought to effect change that would organize vessel traffic flow in an around an environmentally sensitive area where the right whale densities were greatest while maintaining the same level of vessel safety as provided by the existing TSS. In collaboration with researchers at Dalhousie University, using data on right whale sightings from the North Atlantic Right Whale Consortium and vessel tracks provided by the Marine and Communications Traffic Services (Fundy Traffic), we found that some relatively small traffic changes could make a big difference. For example, by shifting the TSS by 4 nautical miles to the east, the risk of a vessel colliding with a right whale was reduced by 90% in areas where the shipping lanes overlapped with high concentrations of right whales. The amendment to the TSS would increase transit times only minimally.

During six years from 1998 through 2003, Canadian Whale Institute Research scientist, Dr. Moira Brown was instrumental in developing a working group of representatives from the shipping and fishing industries, environmental groups and scientists to address the issue of vessel strikes and right whale mortality in Canadian waters. Their work on an amendment to the Bay of Fundy TSS was presented to the Canadian Government (Transport Canada and Fisheries and Oceans Canada) in 2001.  By 2002, Transport Canada, Marine Safety presented a proposal to the IMO to amend the Bay of Fundy TSS. In June 2003, the lanes were rerouted around an area called the Grand Manan Basin where right whales typically congregate in the summer and autumn. This was the first time in the history of the IMO that shipping lanes were amended to avoid and protect a marine mammal species. 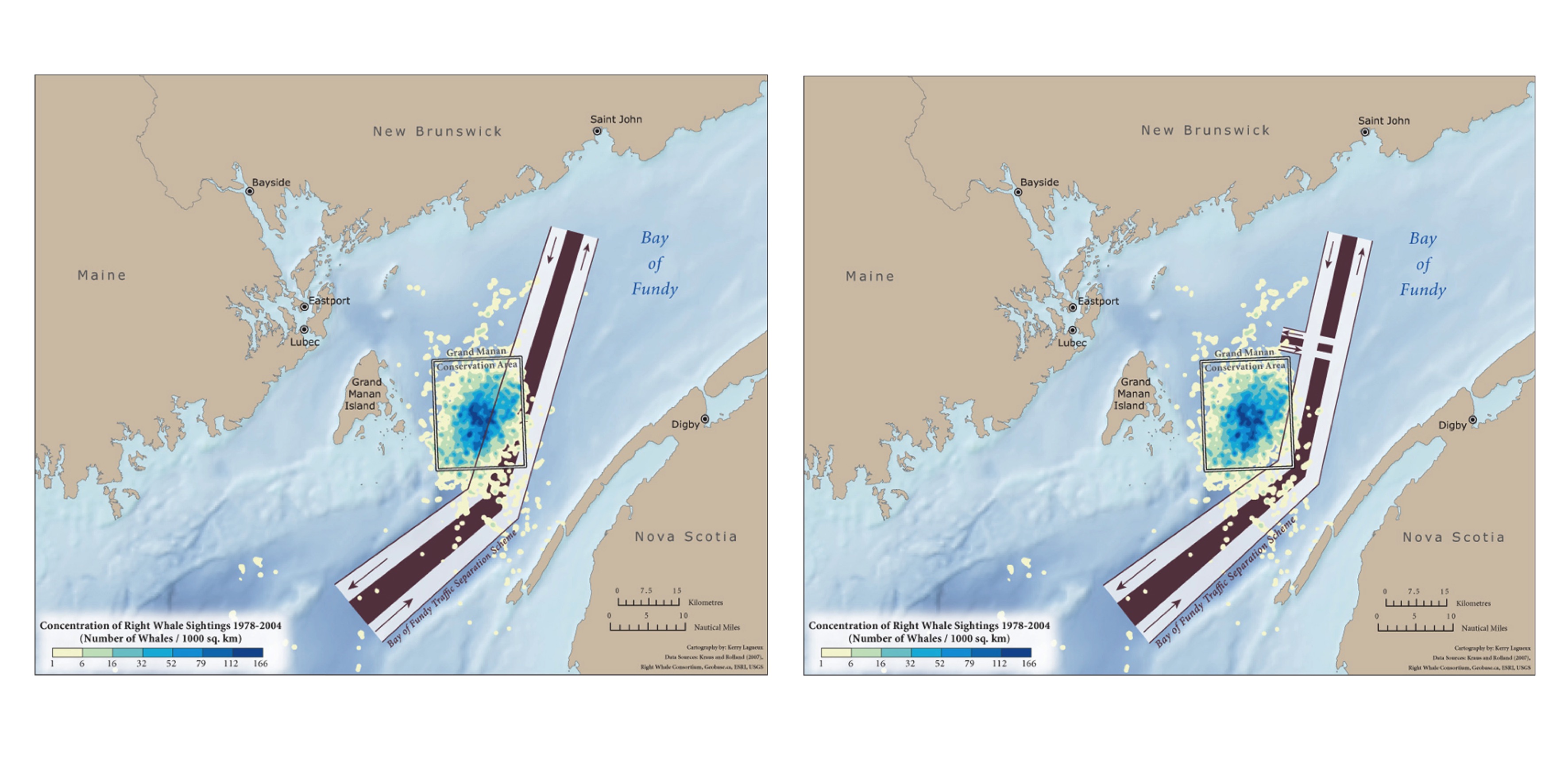 The Bay of Fundy Traffic Separation Scheme (TSS) before and after shipping lanes were rerouted around the Grand Manan Basin.

In 2008, the above precedent setting measure in the Bay of Fundy was followed with an equally precedent setting action; the designation of an Area To Be Avoided (ATBA) in Canada’s second right whale habitat, Roseway Basin, located south of Nova Scotia. This measure, adopted by the IMO in 2007 and implemented by the Government of Canada in June 2008, should reduce the risk of vessel strikes of right whales by 80%. The boundaries of the Roseway Basin ATBA were identified as critical habitat for right whales in the 2009 Canadian Right Whale Recovery Strategy. 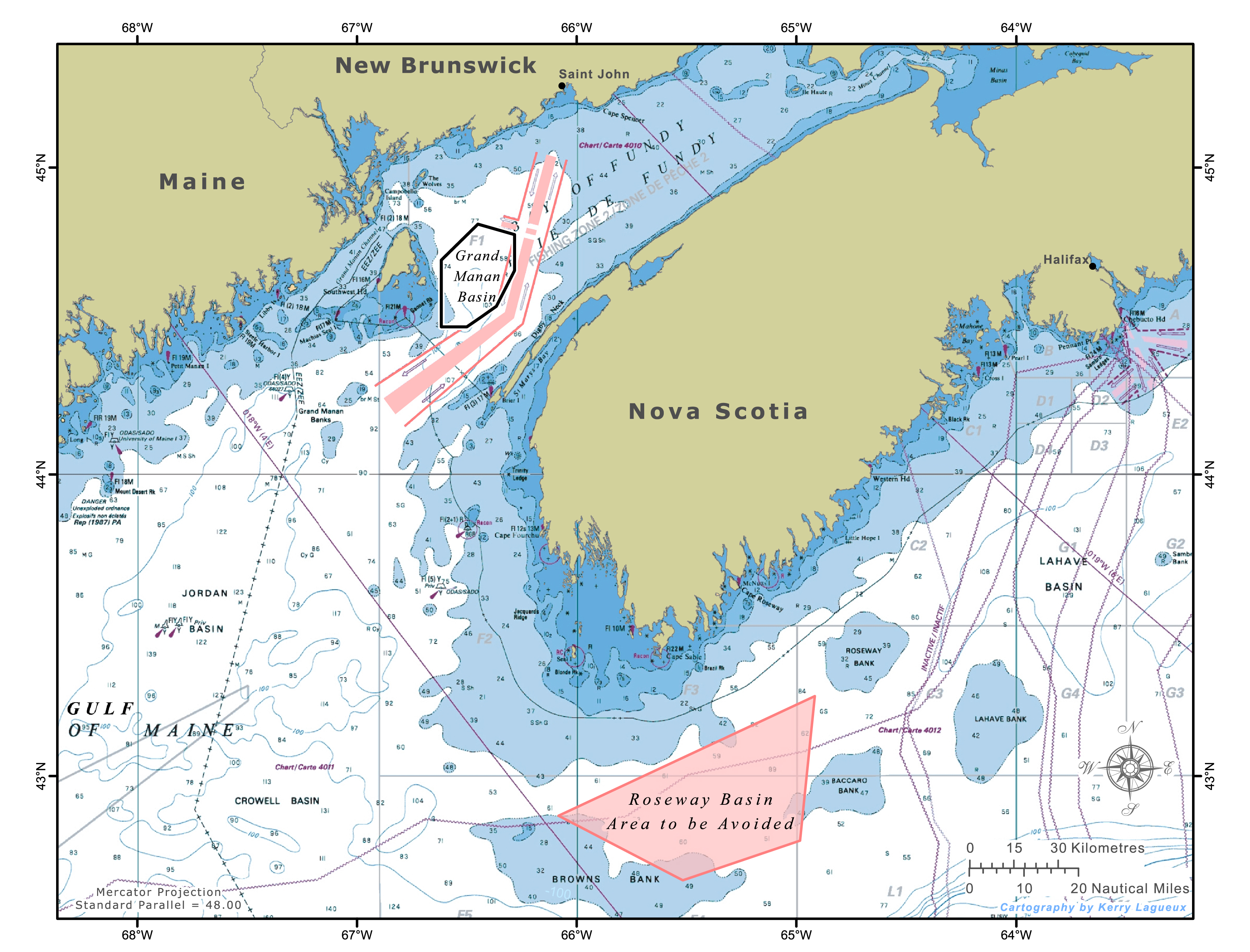 In 2008, an Area To Be Avoided (ATBA) was designated in Canada’s second right whale habitat, Roseway Basin, located south of Nova Scotia.

We continue to collaborate with researchers at Dalhousie University to examine vessel traffic and right whale movements through right whale critical habitat areas and adjacent waters.  This information is used to communicate with professional mariners on right whales and protection measures.